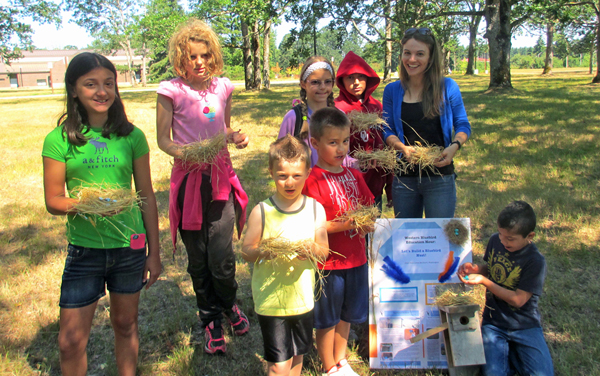 On Saturday 26 July, we hosted a bluebird education program on Joint Base Lewis-McChord Military Base (JBLM) with a small group of military families. The families that participated in this event have been a support system for each other and for me while our spouses are deployed or locally-stationed, making this event particularly special. The goal of this pilot program was to use our bluebird monitoring program at JBLM to introduce families, particularly youth, to the conservation value of military lands, lands that will likely serve as their homes for the foreseeable future.

It was a gorgeous day, as often is the case in the South Puget Sound in summertime – Mount Rainier juts out of the clear blue horizon beyond the airfield, where Chinooks and Apache helicopters wait to be flown, and tree branches lightly sway in a cool breeze. Only 70 meters from where the education tables were set up, a bluebird box on a small Garry Oak tree held five 9-day-old bluebird young. While we were setting up, bluebirds moved from tree branch to tree trunk to grassy ground in search of food, such as moths, grubs, beetles, or crickets, for themselves or their still-growing young.

Looking for bluebirds in an oak grove.

As part of the Western Bluebird Reintroduction Project we monitor the bluebird population and their use of nestboxes on JBLM. Nestboxes have been critical to the recovery of bluebirds in south Puget Sound, following declines associated with human development in the early 1900s. In fact, one of the first nestbox programs in the region was initiated on JBLM in 1982, and, today, the population has grown to a level where birds from JBLM are used to establish new populations in the San Juan Islands and on Vancouver Island, Canada.

Because of the critical role nestboxes play in bluebird life history, the education program focused on the life cycle of a bluebird nest, from nest-building to hatching to fledging. Each family participated in a bluebird nest building activity, including learning what materials nests are made of and how they are made. They learned firsthand how bluebirds put a lot of time and effort into building these complicated nests using only their bills! 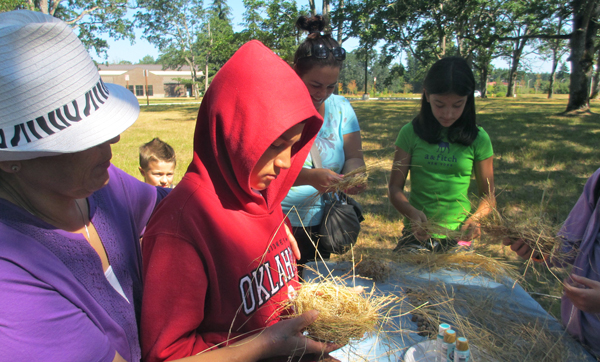 How do birds build this with only a bill? 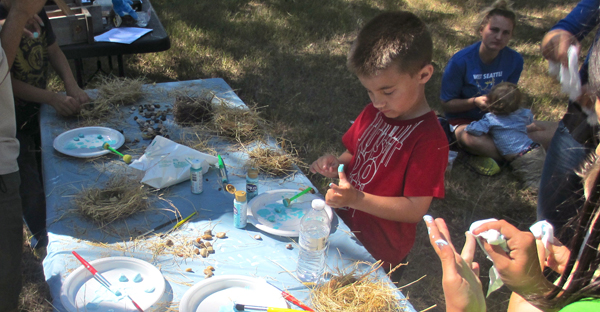 Painting pebbles to look like bluebird eggs can be a lot of fun, and messy.

Families also painted pebbles the familiar blue color indicative of birds in the thrush family (which the bluebird is in, as is the Robin), and learned why bluebird eggs are blue. To answer that question: it is coincidental that bluebirds are physically blue and also lay blue eggs; the blue eggs develop when an antioxidant called “biliverdin” is absorbed into the eggshell in the last 5 hours prior to egg-laying. The blue in their feathers is from a completely different process. 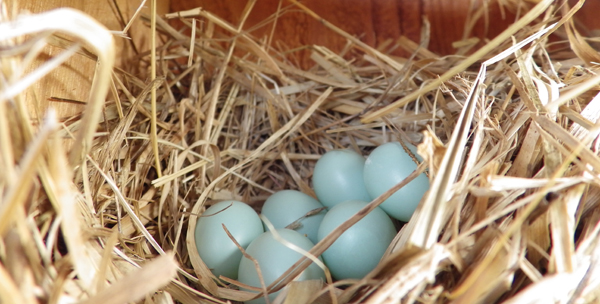 A bluebird nest with 6 eggs. The eggs are blue due to the antioxidant biliverdin.

Finally, everyone had the opportunity to see two bluebird young, whose eyes had just opened and whose wings were not yet unsheathed. One nestling was kind enough to provide us with a fecal sac, a slimy white sac containing the waste material of the baby bird! Not surprisingly, this was a big hit for the young kids.

I have performed ecological work on a number of military properties (and by happenstance fell in love with a service member) and seen the conservation value they have. In my short time here, I have found that JBLM is special in that it supports the most expansive area of prairie-oak habitat that is left in south Puget Sound. The reason these lands still exist is because they have been maintained for military traini