From the sparrow’s point of view, the more invertebrates, the merrier.  Cape Sable Seaside Sparrows rely on invertebrates of all kinds–anything from spiders to crickets to dragonflies–for food for themselves and their young.  You can see changes in invertebrate abundance reflected in the sparrows’ clutch sizes: when the pickings aren’t as good (usually early season), sparrows tend to lay 2-3 egg clutches, but with rain and more food, we see a shift to 4-egg nests.

For this post, I’d like to showcase some of the invertebrates I’ve encountered in my field mornings with the Cape Sable Seaside Sparrow.  (This includes non-sparrow-food invertebrates.)  I’ve identified those that I could, but feel free to comment on our Facebook page if you know what some of the more mysterious invertebrates are!

Eastern Lubber Grasshoppers (pictured above as silhouettes, and below) are large and incredibly striking insects.  From a distance, it’s easy to mistake a grasshopper for a sparrow, since both perch high on blades of sawgrass.  Earlier in the season, the lubbers were black with yellow and red accents (pictured on left), but they’ve now all morphed into their orange adult forms (right).  They also often manage to find unattended field gear.  A few weeks ago, I came back from territory-mapping a bird just in time to stop one from climbing into the top pocket of my backpack.

I’ve become quite skilled at battling deer flies while using binoculars, but they are still a big pain to deal with.  About a month ago, I felt renewed gratitude towards spiders as I saw one pounce on an unsuspecting deer fly that had stumbled into its web.

On one of my first days in the Everglades, I was surprised to find a blade of sawgrass piercing through an old Seminole rams-horn shell.  I never thought I would see a “snail kebab” again, but I’ve since come across dozens more.

In addition to the Seminole rams-horns, shells of the larger Florida applesnail litter the ground.  In May, we also started seeing clusters of pink-tinged applesnail eggs clinging to grass, often over pools of water.

Dragonflies are another abundant invertebrate at our field sites, particularly at our site for Population A.  Sometimes a crowd of Halloween Pennants will gather in the sky, looking like a flock of soaring birds until we focus our binoculars on them.  When waiting for the helicopter to pick us up, it’s easy to stay entertained with these beautiful animals buzzing around us.

My encounters with beetles are few and far between, so I’m always in a good mood on the days I come across one.  I found a weevil, the elephant of the insect world (for its snout, not size), crawling up a flagged piece of sawgrass during a transect survey.  The orange-legged beetle on the right was crossing Main Park Road when I discovered it.

To top it all off, we of course have butterflies!  Michelle and I found the caterpillar of a Queen butterfly chowing down on some vegetation at site A.  Even with its dramatic coloration, we managed to lose it in the grass for about ten minutes.

Fluttering about the prairie, butterflies can be hard to photograph.  I was fortunate enough to find this Pearl Crescent perched atop some milkweed.

Hope you enjoyed this quick look at the diversity of the backboneless in the marl prairie!

Till next time,
Irene 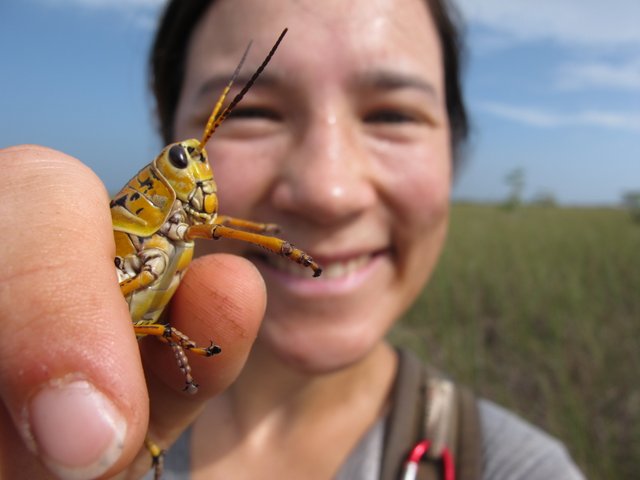