What To Do When Your Field Site Is Underwater: Fir Island Restoration Project

Washington Estuary technician, Leah Rensel, checking in! It’s been a while, folks, and I’ve been drowning in datasheets instead of tromping around outside this summer. As the fall approaches, I am once again in the field and just in time for the fall migration. I’m excited to see the occasional Broad-winged Hawk or Rough-legged Hawk that migrate through Skagit County starting in October. In the meantime, I’m on the hunt for shorebirds and waterfowl at my estuary restoration sites.

A brand new dike has been installed at Fir Island, turning 131 acres of former agricultural land into tidal marsh. This type of habitat is rare but vital for salmon and, we suspect, migratory birds. My surveys started back up on August 1, a few days before the old dike was removed and my site flooded.

While I was not present at the breaching of the dike, it sounded like a very involved event; donors, legislators, and WDFW staff gathered to witness this final piece of the restoration process and to mark the importance of such environmental efforts. Over 100 years ago, this area was transformed from miles of marsh to swaths agricultural fields and now we return it to its original condition. Allow me a moment to be a philosopher instead of a biologist and say that it’s a very poetic notion: the wheels of time keep turning and, just like the seasons, we have returned to where we started. 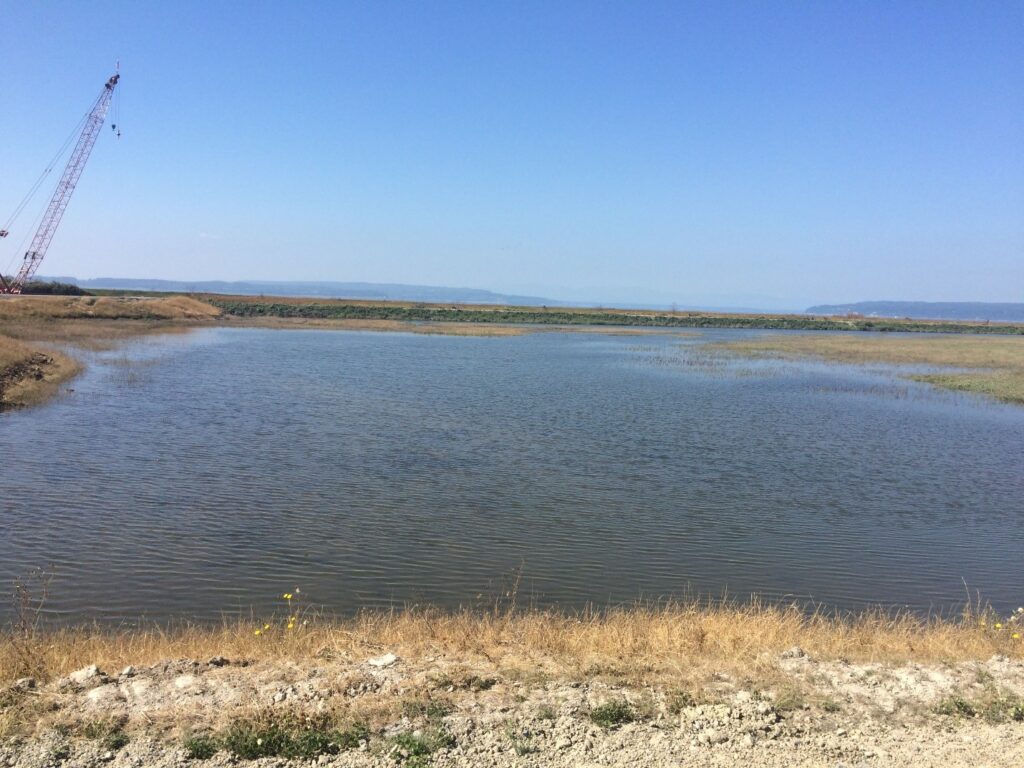 You can see the old dike along the horizon line; the construction crew is busily removing the massive earthen dike that stood there for almost 100 years.

Well, metaphorically speaking anyway. There still is a ton of work to be done. For example, we have cattail; an invasive species that will happily exploit newly available habitat like this. It will try to take over and oust any native marsh vegetation.

This massive ecological alteration affects my surveys; my distance sampling protocol requires me to walk transects, many of which are bisected by channels that will only widen and deepen with time. We intend to explore other composition and abundance surveys. In the meantime, I spend my time mucking about in chest waders and dodging construction equipment as it efficiently removes the remnants of the old dike. 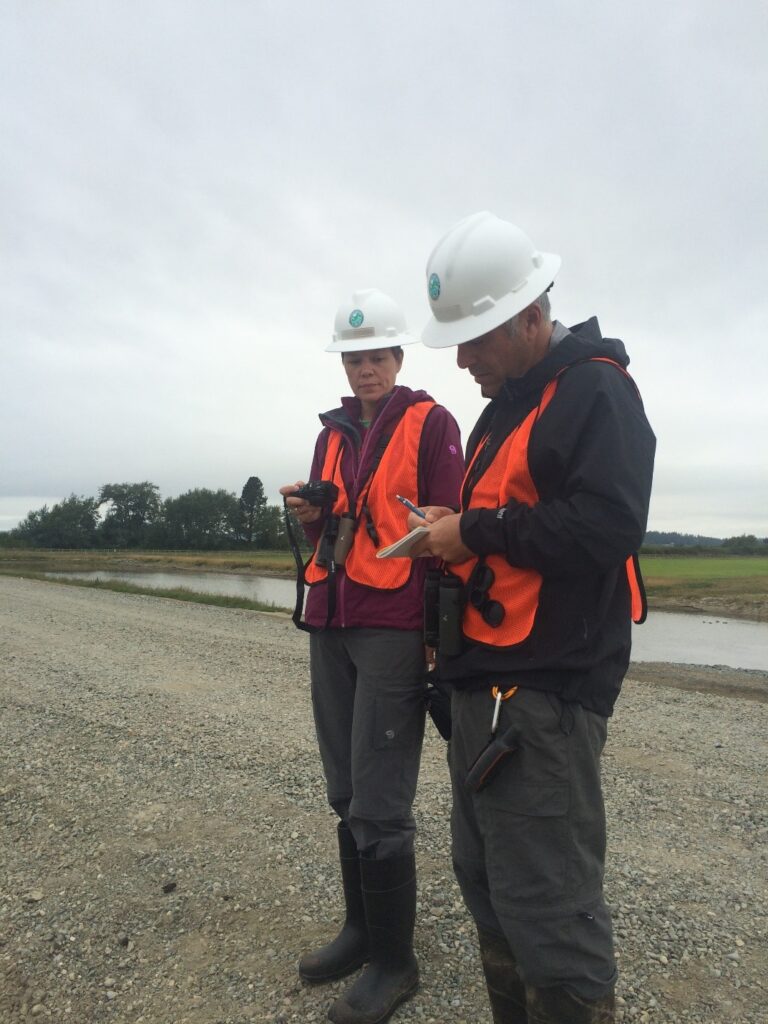 Ecostudies’ Tom Virzi and his wife Kristen contemplate the changes to Fir Island and what this means for our sampling techniques.

The most striking change to Fir Island has not been the presence of knee-high water but the return of avian species. Prior to the flooding, Fir Island was completely dry and if there were birds there, they were way out on the bay where I could not see. My other sites are similarly desiccated and it has made for very boring surveys. The presence of water at Fir Island has attracted geese, shorebirds, waterfowl and raptors by the hundreds.  It’s simultaneous exciting and frustrating; there is nothing more maddening then being able to see birds but not count them. 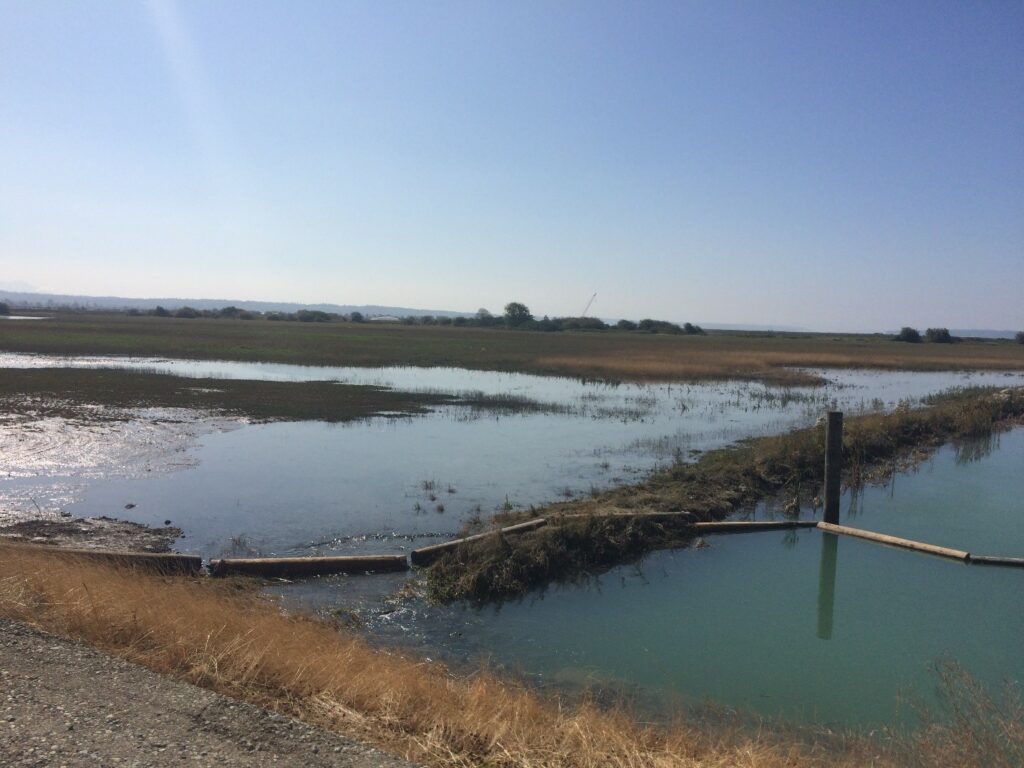 High tide: You can no longer tell there was a transect through this area. While I love my job, I don’t think I get paid enough to swim for science!

I’ll post more missives from the front line (or the tide line, as it were) and document how the dike removal will change the landscape. This is a fascinating opportunity to watch, in real time, the transition of habitat. I (and therefore you) have front row seats to this part