I was born and raised in South Florida and have driven on Main Park Road more than once. As I looked out over the prairies, I would think to myself,  “I would love to walk in the Everglades.”  Now it is a part of my job as a field tech for Ecostudies Institute, and the Everglades have become a part of my life through field trips and research projects. I have been working on the Cape Sable Seaside Sparrow project three weeks now, and there have been plenty of new experiences, some that I have been waiting for, others that I did not expect. Two moments stand out. I will begin with the low point to end with a happy memory.

My low point was due to not wearing proper equipment. Wearing rubber boots was suggested, although buying the correct size was probably implied. My boots did fairly well in an area with ankle deep water. In another area, they preferred being stuck in mud to continuing the hike with me. I get it boots, I was hurting too. I had already fallen twice before Michelle, a seasoned member of the Cape Sable Seaside Sparrow team, saw my sock covered foot in the air. It was then I knew I could not continue. My worst fear was realized: I wouldn’t be able to assist in field work because of my limitations. I was held back tears.

On my very slow walk back to the car, I fell again. I was on my hands and knees with water half way up my arm. When I realized I could not move my feet from the mud, I finally broke down. I let myself stay in that position until I could collect myself. I wondered if I would be able to be a successful field tech for Ecostudies Institute and debated if I was in the right career. “My boots are too big, that is all,” I reminded myself. I shook all the thoughts out of my head and moved my feet deeper into the mud and back up repeatedly. A slurping sound let me know my foot was free. I crawled to drier area, stood up, and wiped my tears with my shoulder (the only dry part of my shirt). I waddled my way to the car and eventually, fell again. This time I laughed. My coworkers let me know it was funny once they saw me stand up again. I know field work and ecology is a career for me, so long as my footwear stays on my feet.

The high point (perhaps literally) is that I finally flew in a helicopter. I was trained as a helicopter crew member (HECM) before field work started to be able to keep helicopter passengers safe and making sure they avoid hazardous situations around helicopters. The training did not provide fly time, so I had been anxiously awaiting my first flight. I was strapped into my seat and gave a thumbs-up to my HECM instructor. The helicopter was less than 10 feet off the ground  before thick fog swept in greatly reducing visibility and safety. It was my second flight that finally took me into the Everglades.

We were tilted forward as the helicopter took off and quickly straightened out and turned toward the Everglades. The air was cold and forced itself into my nose. I was hoping our pilot or Michelle would let us know when we arrived at the Everglades boundary, but I figured it out when I saw the sky on the ground. Water dominated the land with few hammocks and grasses stuck out above it. I squinted to search for animals. I finally saw great egrets scattered on the landscape on the way back to the airport.

I loved the experience, and I would like to thank Commander Dan for my first two helicopter rides. I am excited to head back out and become more involved as a designated helicopter crew member. 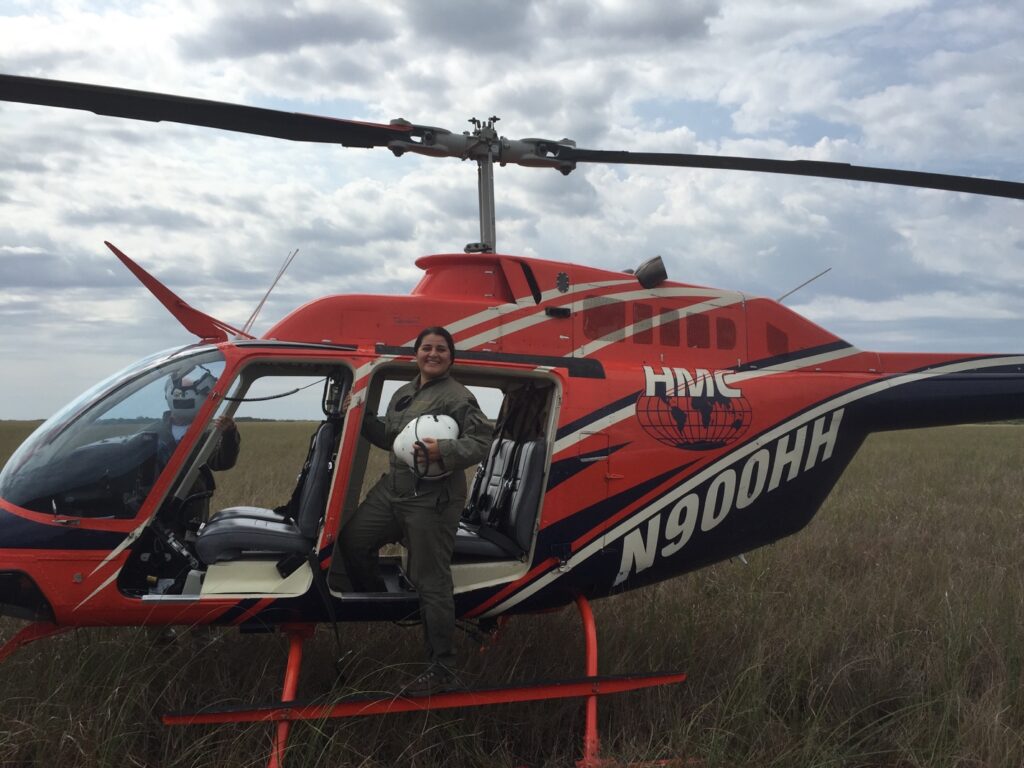