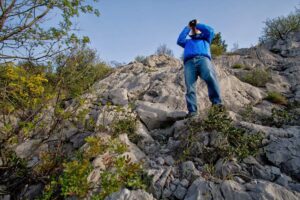 Some of you may have noticed a new face on the Ecostudies website? Just in case you missed my recent addition to our personnel page, I thought I’d introduce myself to you here! I’m excited to join the Ecostudies team as the organization’s newest Research Ecologist. I come to Ecostudies from Rutgers University (on that other coast) after recently relocating to Portland, Oregon. My background working with shorebirds in New Jersey and landbirds in South Florida makes for a nice fit with Ecostudies. I’ll tell you a bit more about my research below, but first here are some less formal things about me that you might find interesting. 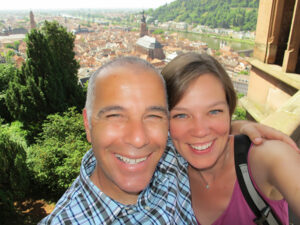 My move to the Pacific Northwest from the East Coast was not all that direct. For the past two years I have been living with my wife, Kristen, in a small town in Northern Italy called Duino. Kristen is a high school math teacher and administrator who has worked in some interesting magnet schools, and when she was offered an opportunity to take her expertise to an international school in Italy for a couple of years we jumped at the chance to live abroad! My grandparents were all from Italy, so for me it was like returning to the old country to learn about my heritage. Italy was great! We learned to speak some Italian, ate more than our share of amazing food, and experienced the beautifully slow-paced Mediterranean lifestyle first hand.

One of the best things about living in Duino was its location in Italy. Nestled on the cliffs of the Adriatic Sea close to the Austro-Hungarian city of Trieste, Duino is a short drive from world-famous Venice, Italy and walking distance from the neighboring country of Slovenia. Best of all was that on any given day if we felt adventurous we could swim in the Adriatic in the morning and hike in the Alps in the afternoon! That photo to the left is of me climbing near the top of Monte San Mauro in the Italian Dolomites, which were just a short drive away. We spent a lot of our spare time hiking and birding up in the Dolomites while living in Italy. The alpine species were always a really fun challenge to find taking us to some really beautiful and remote parts of the country. If any of you birders out there ever plan to take a trip to this part of the world ask me to tell you the spots to go to for those elusive Rock Thrushes, Alpine Accentors and Wallcreepers. 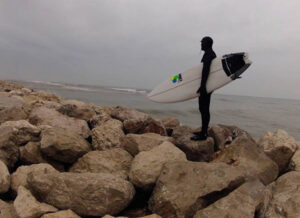 So how did we decide to move out west when we returned to the US? After all, we were living in “New Jersey” before we moved to Oregon. Further, all of my current research is conducted on the East Coast. Well, for starters, Kristen grew up in Oregon. We joke that she has reluctantly been living on the East Coast for the past decade because of me (I’m from New Jersey), so we’ve talked about moving out west for quite some time now. For me, I’ve always thought about living on the West Coast because – as you might have guessed by the photo here – I’m a surfer! And not just a casual surfer – I’m more of the salt water flowing in the blood kind of surfer (yes, some of us do hold regular jobs). East Coast surfers like myself always think about moving out west because the waves in the Pacific are much better than back in the Atlantic, albeit with colder water and bigger sharks. After living in Italy I also realized I wanted to keep living in a place with both the sea and the mountains within close proximity, so Portland seemed like a great choice for us. And here we are!

So about my research… 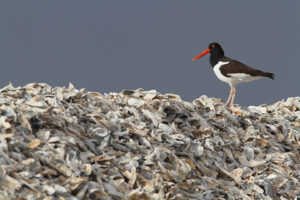 I won’t go into a lot of details about my research here because I’m planning to do some more blog posts later about my current research activities, but here’s a brief introduction to some of the things I’ve been doing. For the past decade, I’ve been working with American Oystercatchers that breed in the back bays of coastal New Jersey. I started studying oystercatchers while working on my Ph.D. in Ecology and Evolution at Rutgers University. When I started doing my research on American Oystercatchers not much was known about things like how many oystercatchers were breeding in New Jersey, where they were breeding, or how successfully they could breed along the heavily-developed New Jersey coast. My dissertation was able to answer all of these questions. Currently, I continue to conduct surveys to resight previously-banded oystercatchers in New Jersey each year as part of a long-term demographic study of the species.