Andros Island in the Bahamas is the site of a large-scale demonstration project funded by the Global Environment Facility – Integrating Watershed and Coastal Areas Management program (GEF-IWCAM), the goal of which is to create a Land and Sea Use Plan that will guide future development on the island.

At the request of The Nature Conservancy, Ecostudies Institute conducted a rapid ecological assessment of avian communities and their habitats on Andros. 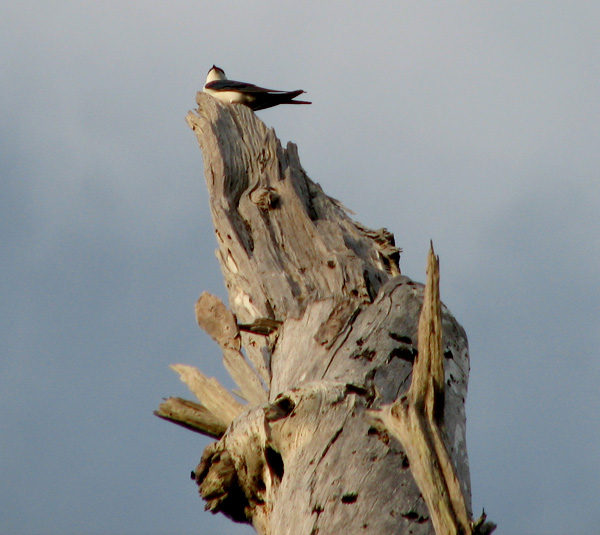 A rare Bahama Swallow (Tachycineta bahamensis) perches above its nest in a Caribbean pine (Pinus caribaea) snag located in a stand of old-growth
pines on Andros. Photo by Gary Slater

Our goal was to identify areas of significant conservation value. Although the avifauna of Andros is poorly known, the island provides critical habitat for several West Indian endemics, including Great Lizard Cuckoo, Bahama Mockingbird, Bahama Woodstar, Bahama Yellowthroat, and Bahama Swallow. Although the human population on Andros is relatively low, habitat destruction and degradation from population growth and land-use changes (e.g., clearing forest for agriculture) likely have had significant impacts on birds. 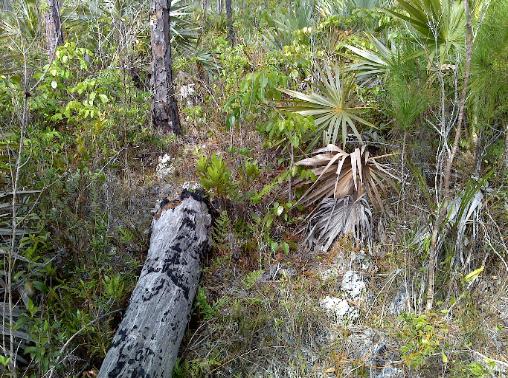 A large downed log – showing evidence of fire – in an old-growth stand of Caribbean pine on South Andros. The structural complexity visible in this photo is almost never apparent in stands that have been harvested. Photo by John Lloyd

A better understanding of the distribution of birds on Andros may allow for future growth to proceed in a manner that minimizes impacts to the island’s unique avifauna. 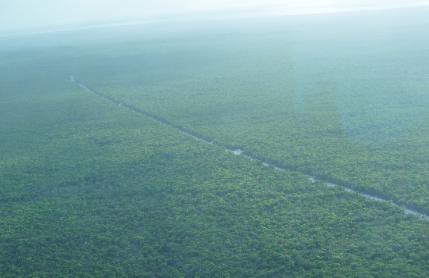 The new South Andros Farm Road cuts through several miles of previously unfragmented coppice. When completed, the road will provide access to a stand of old-growth pines, which will be plowed under to create farm fields. Similar efforts on other islands have failed due to the cost of the massive inputs of water and fertilizer required to grow crops on bare limestone.

We found one of only a handful of old-growth Caribbean pine forests remaining in the world. This forest, part of the pine-rockland ecosystem that also occurs in south Florida and parts of Cuba, occurs on slightly elevated outcrops of bare limestone in the western half of the island. The stand supported a rich assemblage of birds endemic to the pinelands, including nesting Bahama Swallow, Bahama Yellowthroat, Pine Warbler, Hairy Woodpecker, and Blue-gray Gnatcatcher. Unfortunately, since our visit, much of this old-growth forest has been destroyed to create agricultural fields.