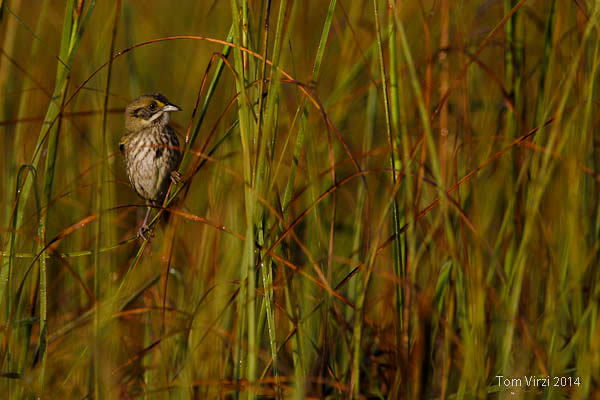 The recovery of the endangered Cape Sable seaside sparrow (Ammodramus maritimus mirabilis) is of central concern to the ongoing restoration of the Florida Everglades. The Cape Sable seaside sparrow (CSSS) is a federally-endangered subspecies with a distribution restricted to the seasonally-flooded marl prairies of the Everglades. The loss or degradation of the sparrow’s marl prairie habitat due to past water management actions in South Florida has led to a decline in the population raising major conservation concern. 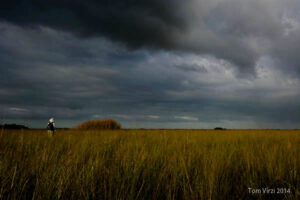 The Comprehensive Everglades Restoration Plan (CERP) is the overarching plan to return a more natural quantity, quality, timing and distribution of water (i.e., ‘getting the water right’) to the Everglades. Under this plan, ‘getting the water right’ is thought necessary to facilitate recovery of a suite of threatened species, including the CSSS. With this in mind, long-term research and monitoring on the sparrow has provided key information for both potential measures to help achieve recovery goals and real-time feedback so that managers charged with making seasonal water flow decisions have relevant information to do so. Presently, Ecostudies Institute continues to lead CSSS monitoring efforts to provide the information necessary to aid in the recovery of this endangered species.

The Central Everglades Planning Project (CEPP) is the next generation of proposed projects to be implemented under CERP. One goal of CEPP is to identify and plan for projects on land already in public ownership to allow more water to be directed south to the central Everglades, Everglades National Park (ENP) and Florida Bay. Although this project is expected to produce large-scale hydrological benefits, there is also trepidation about its potential impact on endangered species, including the CSSS, whose range is extremely limited and population very small.

The goal of this project is to continue monitoring of CSSS populations found in ENP, and on adjacent lands managed by the South Florida Water Management District (SFWMD). With planning and recovery discussions for this endangered species expected to continue over the next year, this project will maintain continuity with previous research and monitoring, and begin to evaluate and consider previously recommended and new opportunities for recovery. During 2017, the specific monitoring objectives of this project were: 1) to continue ongoing monitoring in CSSS subpopulation A, which is considered perhaps the most vulnerable subpopulation, 2) compare demographic parameters with those from a high-quality reference subpopulation (subpopulation B), and 3) to assess the effects of the SFWMD’s C-111 Spreader Canal Project on subpopulation D which is located outside the boundary of ENP. We are also currently developing a spatially-explicit population estimator using available long-term data in order to derive a more accurate range-wide population estimate for the CSSS than is presently available. 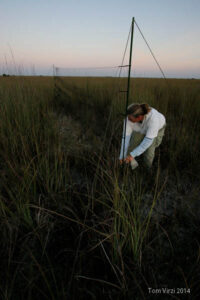 Below we report some key findings from our 2017 field season monitoring Cape Sable seaside sparrows in Everglades National Park and adjacent lands. In 2017, we monitored sparrows breeding in four subpopulations (A, B, C and D).