Ecostudies Institute and the American Bird Conservancy are working to reestablish the Slender-billed White-breasted Nuthatch to South Puget Sound, where it was formerly common. This project will improve the conservation status of the nuthatch in the region, draw needed attention to the conservation of oak-prairie habitats, and highlight the value and effectiveness of landbird reintroductions as a field-tested conservation tool.

The Slender-billed White-breasted Nuthatch is a subspecies that resides within a narrow band of lowland and foothill oak habitats, west of the Cascade and Sierra Nevada mountain ranges. Like many other oak-prairie species in Puget Sound, the nuthatch was considered common into the early 1900s, when habitat loss and degradation from human settlement caused significant population declines. The last breeding pair of nuthatches was recorded in 1995. In Washington State the nuthatch is listed as a Species of Greatest Conservation Need and a Candidate Species for listing as Threatened or Endangered. 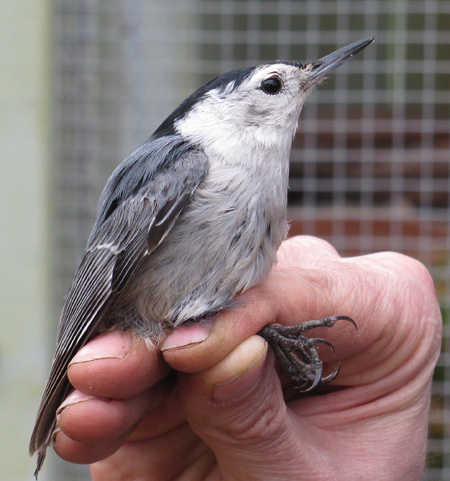 In 2006, we completed a reintroduction feasibility assessment that reported a reintroduction was essential to returning this charismatic species back to Puget Sound and a reintroduction had a high likelihood of success. Reasons for success include: substantial progress in improving the extent and quality of oak habitats in the region, the species’ habit of using nestboxes, and its acceptance of human modified habitat. In many parts of its range it is a common bird feeder species.

In 2013, we conducted two translocation simulations to ensure the nuthatch was capable of handling the travel and captivity associated with a translocation. Both simulations were successful and indicated the species was a suitable candidate for reintroduction.