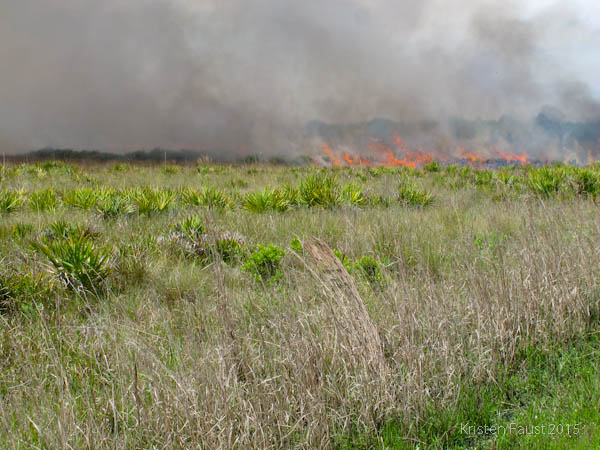 Fire is a natural and important element in the south Florida prairies where we are studying both the Cape Sable Seaside Sparrow and the Florida Grasshopper Sparrow. Under natural conditions, fires started by lightning strikes occur relatively frequently during the early part of the rainy season. They perform an important ecosystem function by reducing the encroachment of woody vegetation into the prairies where grasses normally dominate. And these sparrows do like their grass!

In modern day Florida, most fires are suppressed leading to an unnatural fire regime in the prairies. This in turn leads to a change in the vegetation community resulting in habitat that may not be suitable for these sparrows. Fire suppression has had very detrimental effects on the FGSP population in particular contributing greatly towards the subspecies’ decline. Over the past month of fieldwork I’ve learned a lot about how important fire is to this sparrow.

Most of my past experience in South Florida has been working with the CSSS, and I’ve learned that this sparrow responds very differently to fire than the FGSP. In the Everglades marl prairies, the CSSS will not return to burned areas for 2-3 years post-fire. It takes this long for the vegetation to return to a state that the sparrow likes. The FGSP, however, LOVES fire! This sparrow will return to burned areas almost immediately after a fire!

Since fire is known to be so important for the FGSP, a common management practice in the dry prairies of central Florida is to perform prescribed fires. We were lucky to be in the field during one such controlled burn, which is the photo above. At Kissimmee Prairie Preserve State Park the prescribed fires are conducted in early spring during the growing season for the prairie grasses. I was initially shocked to hear this because I had thought it would take the same 2-3 years for the grasses to grow back, but boy was I wrong.

To understand how differently the dry prairie ecosystem responds to fire check out the following 2 photos. The first one was taken the day that we set up our playback unit for the conspecific attraction experiment we are conducting. Our study site is in an area that was burned with a prescribed fire about a week prior to the day this photo was taken. Notice how black and charred the landscape appears. 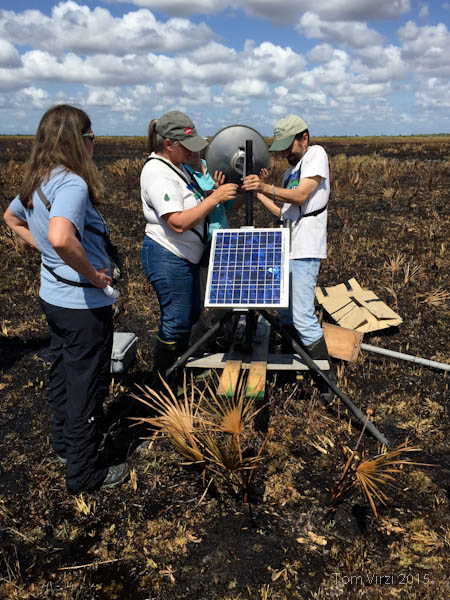 Now look at this same area today. This is about a month post-fire. If you didn’t know a fire had burned through this area a month ago you might never even know it! 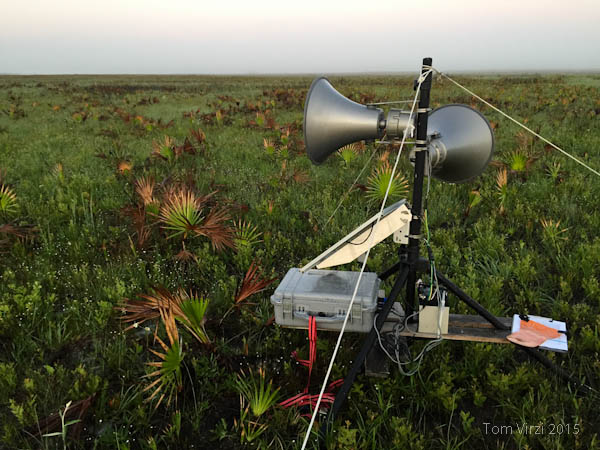 During surveys in this area Grasshopper Sparrows are already being detected, and have been since the first week post-fire. We’re not sure if these are FGSPs or migratory subspecies that winter in Florida, but either way Grasshopper Sparrows are already using the burned areas. Soon enough the migrants will leave, and all that will remain are the FGSPs which will hopefully stay and breed in the prairies at Kissimmee Prairee Preserve State Park.