Even after studying Cape Sable Seaside Sparrows for over three months now, there’s no way for me to tell the difference between males and females–let alone different individuals–just by looking at them.  For that reason, almost all the sparrows on our study plots have unique color bands that help us keep track of who’s who.

With over 15 years of experience, Michelle is a pro among pros when it comes to banding sparrows.  Last week, I shadowed her as she caught and banded a female sparrow in Population A.

There’s a lot of prep work when it comes to sparrow banding, particularly with females.  First, you need to know where the sparrows like to hang out.  With males, a general region is usually sufficient.  Once you play a foreign male song, they’ll rush over to investigate and get trapped in the net.  Females, however, tend to be a bit sneakier.  It helps to know exactly which bunches of sawgrass they prefer.

With the location information in mind, Michelle strategically set up her mist net.  She then played the Cape Sable Seaside Sparrow song to lure the elusive female in, and when the bird finally flew into the net, quickly rushed over to catch her before she could escape:

After carefully extracting the bird, Michelle closed up the mist-net to prevent other birds from getting tangled while she processed the bird in hand.

Processing a bird takes some special tools: at minimum, you need your banding pliers, color-band doodad (Michelle didn’t know the technical term for this device), scale, datasheet, and pencil.  Some of these are pictured below:

Banding pliers, color-bands and color-band doodad, and pencil on top of the banding data sheet.

Michelle opens up the color band with her doodad just before slipping it on the bird.

After weighing and banding, Michelle blew on the sparrow’s chest to check for a brood patch.  A brood patch is a highly vascularized area of bare skin that females develop during the breeding season to warm their eggs during incubation.  It makes it easy to sex adult birds.  Males also have a gap in feather growth on their chest, but it’s not nearly as large as a brood patch (pictured below).

To minimize distress, Michelle tries to be as speedy as possible when processing a bird.  Within minutes, the female was ready to be released! 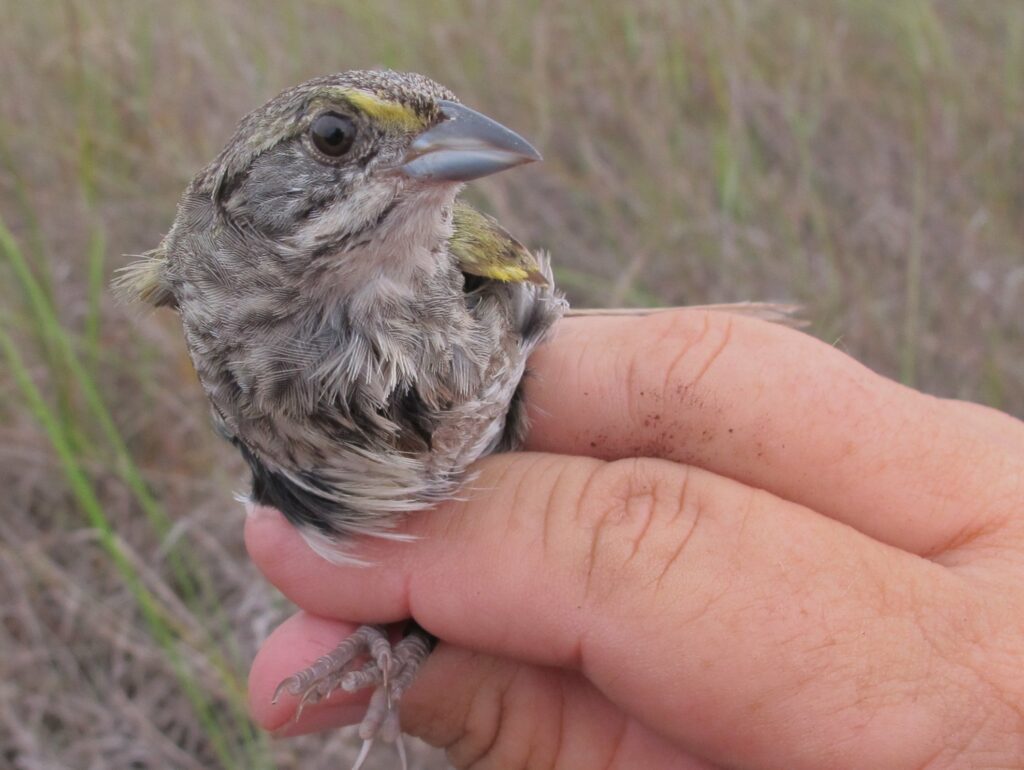